You are here: Home › OOXML › Choice, Innovation and… Appeal?

It seems the Skeleton-in-the-closet Season has come. Yesterday, South Africa was leading what became an unprecedented round of appeal against the -dare I say it- Microsoft Office Open XML format. But just when South Africa had filed that appeal, the news came that Brazil and India were voicing similar complaints.

Today, Venezuela filed an appeal against the OOXML standardization process. At this stage, one more country appealing will not matter that much, and there are some indications that the deadline is over. What matters though, is that one country had actually appealed against an entire standardization process, and according to the ISO itself, that is unprecedented. You will of course remember that we have not seen the OOXML standard’s final specification yet. As some might think this nuisance is of secondary importance, it should be reminded that there is now no more possibility of appeal on the basis of the specification itself, since the standard is not published.

The whole story thus turns out to be a waste, made up of fake promises in hot air delivered by a bunch of con artists. A waste that was thought of at first as a brilliant plan to counter the single biggest threat to Microsoft’s dominance on the Office market, ODF. Oh, it almost worked, after more than a year of sweat, hard work, hard delusion, and pressures on a worldwide basis. And mind you, it still could work. OOXML may not be published (it could have been at least handed over to the national standards organizations who asked for it several times, as it exists, probably locked in a drawer at the ITTF), it may not even be implemented, but it is there, lurking around, used as a scarecrow against CIOs and DIS, etc. The subtle part in that scarecrow tactic is that the promise of native ODF support inside MS Office could be an empty one, or could end up harming ODF just by resulting in a native, but bad support of the open standard.

Perhaps one of the most overlooked aspect of the whole OOXML story is the financial side of the issue. When everything is said and done, one legitimate question coming from the Microsoft shareholders will be about the ratio between the resources wasted (and as of resources, you can include not just money, but also the wasted time, roadmaps, and of course public image) and the final outcome. This ratio is, I think, unfavourable to Microsoft and shareholders tend to be … demanding , to put it mildly.

The financial equation they could eventually think about is this one: how long is this fight going to last, and looking closer into it, why is the same strategy being implemented across the whole set of Microsoft’s technologies, namely through XPS vs PDF, SilverLight vs Flash and .Net vs the Internet. Rather than fighting competition, pushing competitors to bankruptcy and trying to fool around with legislation and processes (such as the ones from ISO), perhaps the time has come to embrace the competition, and walk the line of the industry. Shareholders have had their fair share of Microsoft’s “innovation” and other “ vistasters”.

I’m about to end there; after all, we’re still waiting for Microsoft to join the OASIS ODF TC, so it would be unwelcome for me to criticize them too much now and dispel the good will that seemed to have struck them lately. But please take a look at the homepage of openxmlcommunity.org . I wish these words could work inside the brains of some at Redmond, now that OOXML is more or less dying. Better late than sorry… 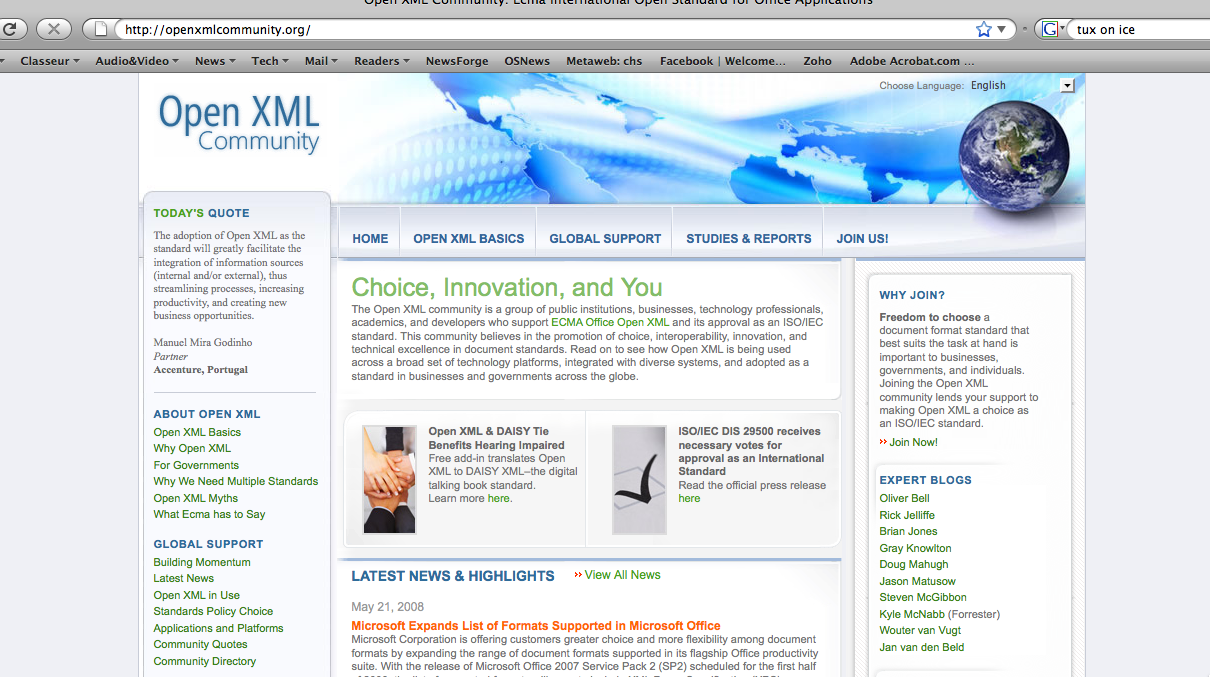 One Response to "Choice, Innovation and… Appeal?"