You are here: Home › Android › LibreOffice 5, a foundation for the future

The release of the next major version of LibreOffice, the 5.0, is approaching fast. In several ways this is an unique release and I’d like to explain a bit why.
LibreOffice matters as much for its features as it does as a platform. Every major release of our office suite tends to be packed with features, listed in detail in our release note on the wiki, or in an abridged form on the website.
In order to convey the strongest point of each release, the LibreOffice community asks its active members interested in marketing what, according to them, should be the most saliant features of the release.

the detailed release notes.
With LibreOffice 5.0, the complexity does not go away; if anything, it increases. I will thus try to summarize why LibreOffice 5 matters so much in just a few words.

Features
I won’t go over the full list that is readily accessible here. But if I were to point out the most important and most worked on set of functionalities, I’d pick Calc. LibreOffice has seen some major work around Calc since the 4.0. Essentally, the engine has been rewritten in the 4.0 and many changes have happened all along the 4.X series.
With the 5.0 the changes are not that drastic but a mix of improvements in stability, new formulae, cell management and performance have led to the release of an impressive spreadsheet application.
Other improvements may of course vary in importance according to this or that particular set of users; Writer’s enhancement of tables may be quite popular for instance.

Style
The other set of novelties however is more about the user interface and the way LibreOffice is used. LibreOffice 5 comes with some very visible changes, such as the inclusion of the Breeze iconset, redesigned menus all across the suite and of course various improvements such as the ones made on the colour selection.
The Start Center has changed as well; other major improvements will be visible in the way menus have been rethought for Impress and Draw. People who like the sidebar will be happy to see that the work on enriching its use and features is ongoing and is visible in the new release. For me and quite many others I think, one of the most welcome addition is the ability to visually check what every style does inside a text document. 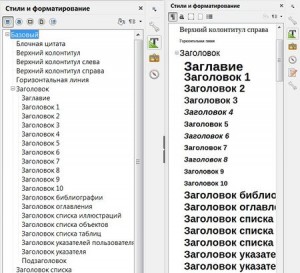 This will help save a lot of time when you don’t know or remember what a particular style does to a specific header once applied to the document opened in Writer for instance.
All in all, LibreOffice 5 has lots under the hood as well as a lot to show in this release. But as I wrote at the beginning of this post, this is actually only a part of what this release offers.

A platform and a foundation

LibreOffice 5 will be released at a quite interesting time. In terms of development, the release comes at a time where major efforts are invested on the Android clients as well as on the cloud version of LibreOffice.

Few people realize that the code of the “cloud version” and any mobile client, viewer or editor, is actually genuine LibreOffice code: what you use on your desktop, Windows, Linux or OSX, is used in a different configuration for Android and will be powering the cloud version in the near future.
Because of this, one should think of LibreOffice 5 as a platform that will power several distinct versions of LibreOffice for different form factors, and a platform that can be extended for quite some time.
The transformation of the LibreOffice code base into a software platform is of strategic importance for the Document Foundation and dare I say, for Free and Open Source Software. Of course, this transformation does not come free of charge: the amount of work and effort put in by developers for this release is truly astounding: we should thank them and a good way to do so is to remember that they need to eat just like anybody else: You can donate to the Document Foundation or contract any developer certified by the Document Foundation for support, services and expertise.

In the meantime, this is a very special and exciting release -stay tuned for more surprizes- and I hope you will be excited too!

6 Responses to "LibreOffice 5, a foundation for the future"