This was quite a busy month. I was happy and exhausted by the LibreOffice Conference which went despite my immediate perception quite well. When you’re part of the organizers you tend to see all the small and not so small things that go wrong, and regardless of what the other participants notice or experience, you end up feeling that it’s just not as good as the others see it. Be it as it may, I would like to thank all the participants to the first LibreOffice Conference. It’s been very moving and heartwarming to see all of you, after a year of adventure and perils we have gone through. I would also like to thank all the organizers of the LibreOffice Conference, the community volunteers of France who made it possible, Sophie, Marie-Jo, Christophe, Jean-Baptiste, our hosts, La Cantine and the IRILL, and our sponsors. Among them, a special mention should be made to the Paris Region (Région Île de France) with whom we announced several exciting news. It’s all in the press now but I think that these announcements highlight how far we have come in one year. More importantly, it also shows how a Free Software community can work as it should, that is, with diverse contributors and a variety of stakeholders in a sustainable fashion. Of course, all this is far from being built and all the dots are not being connected. This year will therefore be exciting as we will continue to build and grow our community further. 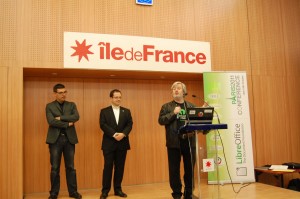 I would like to come back shortly on two of the announcements we made, regarding the porting of the LibreOffice platform (not the interface) to iOS and Android, as well as LibreOffice OnLine. While these two projects are at various stages of completion and have different requirements they help to show not just the vitality of our community, they also shed some light on how we manage to embrace a bazaar-like approach to development and think about what I call our “development ecology” (which some could really translate into development strategy, but I think it’s more subtler than that). What you see through our online office suite project and platform porting announcements is that we are taking some great care in doing something paradoxal with respect to our stated intent to change the codebase as much as possible: we keep our codebase intact. Note that we do change, upgrade, clear and trim the codebase, but we do adopt a singular codebase approach where the code used in LibreOffice OnLine, and the underlying code on iOS and Android will essentially be the same than the one inside the LibreOffice Desktop suite. In other words, we do not release a product here and something completely different there, even if in the future, a specific work on the interface for tablets will have to be made (we won’t use the existing interface on these as it would not make sense).

This “universal” approach makes sense not just for “market growth” and adoption, it has two benefits. The first one is to pool the resources as much as we can, because maintaining millions of lines of code here while maintaining a million of new and different lines of code there would not require around 3 hundred developers; it would actually require 3 thousands of them. We thus keep the codebase as a coherent whole (hence Rob Weir’s confusion answered by something like “just pull the git”) while we will enjoy in the future the second benefit of being able to make changes (and even important ones) in one codebase, thus replicating the changes for the online version at the same time as they will be made available in the desktop or the tablet version.

Exciting times are ahead. Stay tuned!

One Response to "October wrap-up"