You are here: Home › Linux › Arch Linux makes Linux fun to use again.

It’s been a month since I have installed Arch Linux on my workstation and I thought I would talk about this Linux distribution a bit. Arch Linux is pretty much all the rage these days in the world of Linux distributions. If we are to believe the famous Distrowatch stats that were recently published and compared with the data of 2008, Arch Linux is the fastest growing Linux distribution these days. It gained quite many users, probably at the expense of distributions like Gentoo, yet it is not usually considered to be an “user-friendly” distribution. I will briefly outline what have been, and what is, my experience with Arch, and I believe I am going to stick with this particular flavor for a very long time.

I have tested several Linux distributions in the past years, starting with Mandriva and using Debian, Fedora, Suse, Ubuntu, while having installed Linux several times on my family and friends’ computers. You can read in this previous post of mine that while my “usual” distribution was Fedora I had some rough issues with the upgrade from Fedora 11 to Fedora 12, and that prompted me, after some adventures, to install Ubuntu. Well, I stayed about two weeks with Ubuntu, in the end. There was nothing wrong with it, it’s a beautiful distribution (except for the buggy packaging of Claws Mail, my default email client) everything runs just fine, drivers, 3D, Second Life, third party repositories, etc. But I was somewhat dissatisfied for egotistic reasons: I have been using Linux, as a desktop user, ever since 2001 (with some intervals with OS X) and although I don’t want to fiddle too much with the system, I like to customize it, to tweak it and to gain a technical knowledge of it. So when I found myself at a barcamp in Paris in December sitting next to someone who was less technical than I am using Ubuntu on her desktop, I got the personal, but awful epiphany that I was, just like everyone else, using the Windows XP of the distros. Sorry for this Canonical, sorry for this, Nick, it’s actually a major achievement to be thought of a Windows XP in your industry, but I’m perhaps too much of a twisted, egotistic nerd.

I don’t exactly know how I came to Arch Linux. I guess I was reading an article about it, then in one evening I documented myself, and what attracted me to it was the different packagine, the style, and also the fact that hardware was not a problem (wireless, video card, etc.) So I gave it a try, and the first impression I got, besides thinking I was back in 2001, was that it all made sense. What I mean is that once you have gone past the two minutes of emotional intensity (oh my God, the screen went black and these small white letters are being typed by an invisble hand!) and that you… read what your options are, it’s not that difficult for you to install and configure the system. In a sense, I would even say that since Arch Linux installs only what you want it to install, there is no instant clutter on your desktop. I often found out that I spent more time configuring my desktop by pulling out what I did not need and replacing it sometimes by other programs than the actual time I would be spending installing the system. In this regard, Arch Linux, whith some rough edges at the beginning, was a different experience. You get what you want and it’s all right if you don’t manage it the first time, there is plenty of a well organized documentation for Arch available on their wiki or even as a book. Documentation is clear, well written, and asking on the forums really helps.

In the process, I leaned, or relearned a lot of things. From the point of view of the desktop user, Arch Linux can be configured by using pacman (the package manager available in command line and graphically, through Shaman, a direct competitor to Synaptic), editing the rc.conf file in the /etc/directory (it’s all human readable, don’t worry), and starting or stopping services through /etc/rc.d . You don’t really need to go beyond that on a daily, weekly or even monthly basis.  Package Management is quite interesting. Updates, even when you are not using the testing branch of the distribution, are not updates that are pushed at you and that you have to digest. Arch Linux is a rolling release, which means that it’s a distribution without release. You install a base system (itself on a rolling release) and it “morphs” according to your needs without any need to reinstall. That’s the theory, because I think one would need to reinstall it every few years, unless everything runs perfectly. So this rolling release mode makes it possible for you to use the latest versions of software without the need to wait for the next big release or the issuing of a backport. But it depens on you to understand what you are about to upgrade: Going from Firefox 3.5.6 to 3.5.7 should be no problem, but changing the version of nvidia modules is a different game. That’s why it is recommended to check out announcements and the Arch forums each time you want to update your system.

Package management, however, does not stop there. Arch packages (which are really tarballs of the binary versions of the software compiled from the source) are vanilla packages (except in some very rare instances) but the team maintaining the core and extra repositories is too small. That’s why you can have access to the community repositories and the Arch User repositories. These sources are places where the community contributes packages it has compiled using Arch’s own build system, the ABS. That’s where you can find many interesting software. It is also easy for you to compile any software provided you have the source, and upload it in the distribution.

My big surprize was perhaps the fact that Arch works. It is a system that actually works. By this I mean that there is no “tweaking around” solution. It works and the reason why it works makes sense on Linux, not on one specific distribution only. All this , in the end, brought a lot of fun in using Linux for me. I am not suggesting Arch is for everyone, but if you want to try a rock-solid distribution that’s blazingly fast and in the end, pretty easy to configure, you should give a try to Arch Linux. It’s a good way to start 2010!

Below is a screenshot of my desktop under Gnome. 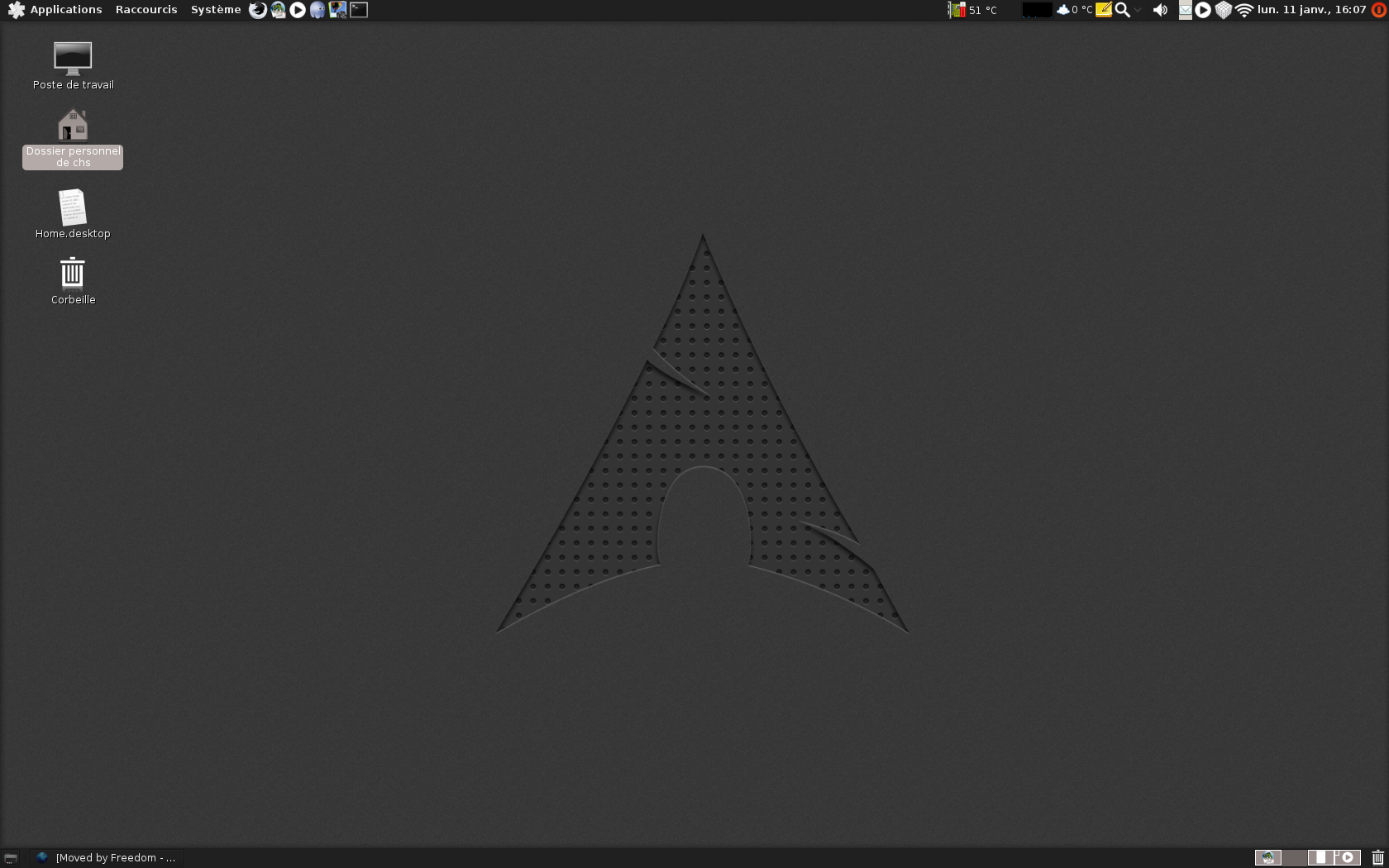 21 Responses to "Arch Linux makes Linux fun to use again."