You are here: Home › emacs › The art of shaving
The topic of the blog is unusual, but I am writing it by popular demand. It isn’t about software freedom, it isn’t about open standards, cloud computing, software patents or anything of the sort. Today, I will tell you about my experience with… (drumroll) traditional wet shaving. If you’ve read a bit about my profile page on this site, you know I’m a big fan of wet shaving. But shaving is not an art, nor something even worth mentioning for millions of men everyday. To me however, and to possibly hundreds of thousands of other men, wet shaving is an art, a pleasurable experience renewed each passing day, and an actual convenience. And like many others before me, I’m about to share why you -the male reader and the female one alike- should pay attention.

First, what brought me to wet shaving and why should it matter? Quite literally, because I had many itches to scratch. Ever since my teenage years and my first irregular, unscheduled shaves, I experienced discomfort: I first tried an electrical shave. My skin became red, warm and itchy despite the generous amount of aftershave I applied to it. I then tried regular wet shaving, and I automatically felt it would never try the electrical shave again. In fact, I’ve been sticking to wet shaving ever since. But for pretty much my late teenage years, my entire twenties and my very early thirties, shaving was still an uneasy moment, as I knew I was at significant risk of getting all sorts of blemishes and rashes. A variety of factors could have explained these inconveniences: sensitive skin, wrong shaving cream, bad blade or more to the point, overused blade. The truth is, all of these were actually valid explanations: my skin is definitely sensitive, the shaving cream may not have been the best, the blades lacked proper cleaning and after a while were just spreading impurities and germs.

The solution to all these problems were once hinted at me by a good friend and a Free Software luminary, Georg Greve. As I was travelling to one of the first SFSCon in Bolzano several years ago, I realized I had forgotten my razor and my shaving equipment. Georg, who was at the first dinner the night before the event, told me how pleasant his shaving experiences were. I realized that just outside of my hotel was an old-fashioned boutique selling blades and cutting equipment. I entered, bought a Merkur travel razor with Bolzano double blades (not one blade over the other, but the actual “safety blades”, with one blade on a side of the razor and the other one on the other side). I got some Nivea shaving cream and aftershave, and off I went. My first two shaves were closer to a butchery than a shave. I showed up to the event with scars. I went back to Paris and had a dinner with friends. It was awkward for the first hour as they were looking at my face, pondering what kind of weird torture I had gone through. Thankfully I got much better, even though there’s an actual “bump in the road” here and there. 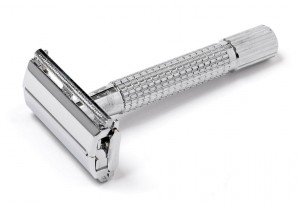 Traditional wet shaving is an art; it is usually practiced by using safety blades as described above or a straight razor (the large blade used in the XIX and XVIIIth centuries still used today in barbershops). Another aspect of this “art” is that each ingredient is usually thoroughly tested; but the entire list of requirements is actually simple. Some people are happy with one warm towel applied on their face before shaving, a good shaving soap and a splash of aftershave. Others will apply some preshave oil or cream on their warmed and wet skin; then lather the cream or the soap of a shaving soap on their beard with a brush; shave with precise and minuted movements; rinse, apply some anti-cuts Alun stone; apply an aftershave calming balm and then an aftershave splash as an eau de toilette. I’m somewhat in between these two (more on this below). The interesting thing, however, is that I always found that shaving “like everyone else” was quite expensive, mostly because of the blades: A pack of Wilkinson Quattro or the equivalent Gilette would cost me over 10 Euros in Paris for 6 blades (6 x 4 mounted blades on a plastic ensemble). Each of these 6 blades would at most last a week. At the end of the week my skin would just be one sorry, sad red rash. Now, I can get a high end Merkur set of 10 blades (10 two sided safety blades) for anywhere between 5 to 6.50 euros. Most of the time, I can pick for lower prices with other brands and I can reach 1.50 euros for 10 Gilette blue blades. While I still keep a tube of nice Portuguese shaving cream around, I use the exquisite, old-fashioned crafted Martin de Candre shaving soap: a box that will last me over 2 years when shaving 5 times a week will last me about 2 years and cost 45 Euros max. Compare this with your supermarket bill of shaving creams.

And now, for my own list of super shaving ingredients. I encourage you to try a lot of them; I’ve only really tried a subset of what’s on the market. My advice would be, whenever you can, to rely on local and artisanal brands: they’re the best. Hence your picks will be different based on your geography:

That’s pretty much it. You know almost everything I know on the matter. I forgot one thing though: If you can, call a barbershop, and ask for a real shave one day. You won’t regret it. It’s magical and a real relaxing experience. Enjoy!

2 Responses to "The art of shaving"