You are here: Home › community › LibreOffice 5.1- an unusual release

The Document Foundation just released LibreOffice 5.1 and I would like to share some personal views about it. First: give it a try, you will be impressed both by the performance and the changes in the user interface. You can then check the abridged release notes here and the full, canonical notes there.

In many ways, this release is unusual. First, a bit of nitpicking. I believe it is the first release that comes with a rather confusing version number. To me, anything tagged as “5.1” implies continuity, and not a major release. The discussion about the version numbering scheme is ongoing but I think the present version number does not do justice to this release. Another unusual characteristic about this version is the number of changes in the user interface. Some background is needed about these. LibreOffice has 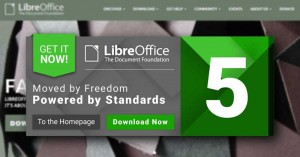 never had an important UX/design team of volunteers and, what’s equally important, a process ensuring most of the design changes proposals will be implemented by the developers. In other words, the project has both an active community of designers (we had it at times but never as large as this one) and the ear and trust of developers. This makes many incremental changes, minor or major, easier to propose, specify and palatable to developers who can code the change as a result. This is not to say we have an army of designers: if anything, they are looking for more volunteers in order to accelerate the pace of improvements and changes in the user interface.

This state of things does lead me to a personal and rather unconventional observation: the way these changes in user interface has been received is mostly positive. This, in some way, comes a surprise. Changing the user interface in a software that has a massive adoption is never trivial because there will always be people who will complain about the change. Sometimes they are the ones who are right; sometimes you are the one with the better idea; and sometimes it’s just a matter of taste. I -we- would like to think that most of the changes that have been shipped in LibreOffice 5.1 were the right decisions and at the very least, that they are nice even if subjective ideas. Where it gets interesting is when both the press and the users tell us the release is great and they find the improvements in the user experience to be really welcome. That is not just comforting. It goes against the notion we should either be totally conservative and keep the interface as it is or that we should change everything including the kitchen sink, because you know, “MS Office did that several years ago and now it looks cool”.

It turns out that we seem to have made a lot of people happy and this is really comforting. Especially when tomorrow (as I’m writing these lines) is the anniversary of the Document Foundation! The people who have made this release possible, all of them, can pat themselves on the back – and you can help them by donating to the foundation or hire them for consultancy work if you’re a company or government. Thank you for your trust and support!

10 Responses to "LibreOffice 5.1- an unusual release"