On the Saturday 1st of May 2005, ODF 1.0 became an ISO standard. So as Rob Weir and the ODF Alliance already did, let me wish as well a happy birthday to OpenDocument Format. By this I would like to celebrate the fact that after 5 years, ODF is alive, kicking and growing its market share at a nice rate. But I would also like to thank everyone behind ODF, the engineers, the OASIS consortium, the volunteers, the implementers, and the users. Without you ODF could not exist, and as ODF 1.2 is almost out of the door it’s good to see how much the ODF ecosystem has grown and is growing.

In the ODF Alliance’s whitepaper, you will see an interesting chart that I have included below. What’s interesting is to read between the “lines” of the chart. 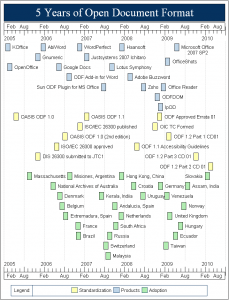 What is shown on the chart are the joint evolution of the format development itself, the emergence of an ecosystem of applications using ODF and the rate of governmental adoption. Based on these three trends I’d like to make a few comments:

– Contrary to what some lobbyists have been trying to explain to various types of customers but most openly to governments, there is no difficulty in the fact that ODF, just like any other standard, has multiple versions and that these versions evolve with time. As long as the standard does not stop to be retro-compatible with itself, it’s perfectly normal. Which means in simple mathematical terms, that if ODF 1.0 has X features, ODF 1.1 may have Y features but not only will Y include X, it will also be perfectly possible and easy for an application implementing X to read the X in the Y format.

– Indeed, the rate of government adoption has not stopped. We are now entering a new phase where we see relatively less announcements, but much more deployments, which also means that the governments are now effectively adopting ODF.

– The number of ODF-ready and capable applications and platforms is growing, which is a telling sign of the health of a standard. More than that, the number of software libraries for ODF is growing (check out lpod) for a good example.

– Last but not least OOXML, which is not shown here, has not so far made any inroads and has zero or extremely limited adoption. The reason is simple: the ISO standard known as OOXML is not even stabilized and its main implementer, Microsoft, does seem to have some trouble enabling it in Microsoft Office. The file format with .docx and .xlx suffixes used in Microsoft Office 2007 is but a proprietary and undocumented format with a name similar to the ISO standard does not help with the confusion. This format does not have a strong adoption except when dictated by deployments of Microsoft Office 2007 and it seems that it is becoming a tough sell for governments.

So what is left for us to accomplish? Where will ODF be in 5 years from now?

More adoption, a stronger ecosystem, and a gradual but quick merge of the online realm with the one of the good old office suites, making ODF not just a “document format” but a pivot format of everyone’s data on the desktop and in the cloud. But this story remains to be written…

One Response to "Happy Birthday ODF!"