You are here: Home › community › Reuniting LibreOffice and AOO – a personal take

As we are approaching the 4th anniversary of the LibreOffice project in just a few days, an old theme has been reappearing on the Internet: Apache OpenOffice and LibreOffice should reunite. I would like to share my perceptions on this topic although I think it is not a really important one, at least as long as the LibreOffice or Apache OpenOffice do not officially call for such a reunion. Before I start, let me remind everyone that what follows is my own opinion and neither the one of the Document Foundation, nor the one of the Democratic Party, the one of my Government, nor, at last, the one of Bob’s Shipping and Handling Company.

I am obviously biased in my judgement; I’m even a party to this game. But I am also relatively well informed on these matters, and you may want to read Leif Lodahl’s excellent post for more background. Let me clarify first that reuniting the two projects is an inherently political concept that covers several questions. Among them, here are a few that need to be answered.

1. How would we reunite?

When the LibreOffice project was announced, the project asked Oracle to join and transfer the brand ownership to the new project. That didn’t pan out well. Oracle waited some time before deciding they would license the brand to the Apache Software Foundation, alongside the code of OpenOffice.org itself. There’s one important word here: Oracle licensed these assets. 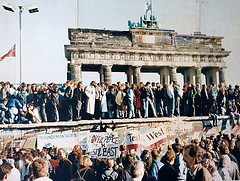 Credits: Senate of the State of Berlin

It did not give nor sell them to the ASF. The full ability to dispose of the brand name “OpenOffice” would be somewhat uncertain from the onset, and LibreOffice would then be the brand used. Even if that was not the case, how would it exactly work? Would we release the same software under two brands? Two distinct releases under two different names?

2. What would we reunite?

That’s where the licensing part comes in: The choice of license is probably one of the biggest technical hurdle to such a reunification. On the one hand the LibreOffice codebase can, thanks to its licenses, accept patches licensed under the Apache license, but the reverse is more difficult (although perhaps not absolutely impossible). This constrained flow of code would be decisive, in the scenario of a reunification, as it would lead to stop the licensing of any new patch under the Apache license while leaving the present licensing scheme of the Document Foundation intact. My educated guess is that I don’t see the Apache Software Foundation allowing that to happen .

3. Where would we reunite?

In other words: what repository? Where? Would we use the ASF’s SVN repository of the Document Foundation’s own infrastructure with Git as the version control system of choice? Perhaps a third party (existing or created ad-hoc) would be another option.

Who would be the parties deciding is another delicate matter. On one side, the Document Foundation is an obvious stakeholder. Depending on the kind of reunification (more on this below), there would likely be some areas of discussion that would be not even considered just because of the Statutes of the Document Foundation (a charity cannot just go ahead and give away its assets like that). Aside the Document Foundation and the Apache Software Foundation, Oracle would probably be at least a necessary party to the discussion; and obviously, IBM. I’m sure I forget a few… but judging by the table, the dinner would likely be a delicate matter to handle. Having said that, it is not entirely clear what would be the voice of the broader community: as it stands, the Document Foundation is the only entity here directly representing its members, who are individual contributors of the LibreOffice project. The ASF does that too, but Apache OpenOffice is but one tiny fraction of the whole ASF community.

5. What kind of reunification do we want?

Beyond the rather specific questions asked above, this question has broader implications, because this is one that points out the actual reason and meaning of an hypothetical unification of the two projects. Do we want a merge of equals into a new structure? Is it even possible? I have highlighted a few points above that suggest this scenario would be technically difficult. Do we want LibreOffice to merge into ASF and AOO ? Obviously I don’t, but the question has been asked before. Why would we do that? Is  it even possible?

Licensing differences suggest that the LibreOffice-specific contributions would need to be dumped. It would end up meaning that LibreOffice would dissolve into AOO and disappear with all the work done for naught, and given the difference in size between the two projects it would just be like an elephant trying to go through a doorlock.  Do we  want AOO to merge into LibreOffice? Licensing-wise it would be possible. Would ASF want that? I don’t know. The Document Foundation can, I think accomodate the project and its members. We have seen massive migration waves before. We can certainly integrate the AOO team. Ultimately, the contributors of each project would be the judges by voting with their feet. And that is not something the Document Foundation, Apache, Oracle nor IBM will ever control.

6. What is it we’re trying to achieve?

When members of the old OpenOffice.org project used to sometimes discuss the future of that project with the good folks at Sun Microsystems, they would often hear the same question thrown back at them: “Tell us why a foundation for OpenOffice.org would help fix the project’s issues”. Invariably, any point that was raised in favour of a foundation was brushed away by providing whatever solution that did not involve the existence of an independent foundation. It used to illustrate perfectly the difference between real outcomes and the foreseen results based on a rational argumentation: the two don’t necessarily match. With a strange twist of irony, I must now ask the same question: “Why would the reunification help fix any of these projects’ issues?” I will quickly list here areas of concerns and topics that are usually pointed as reasons to unite the two office suites:

The stronger brand value used to be a very good argument, perhaps even the best one, in 2010 and 2011. I started this post by highlighting that the LibreOffice project’s founders had actively sought Oracle’s consent to use OpenOffice for the new project. Now, we’re barely 72 hours away from the LibreOffice project’s fourth birthday. The project is doing well. There’s still much to do, but it has exceeded what many used to imagine would be possible. While the LibreOffice brand started from zero in 2010 and 2011, things have changed. Obviously, OpenOffice has a more known brand, as it capitalizes on 10 years of existence of its old project; I’m sorry to say that Apache OpenOffice has little merit in this achievement aside its very existence. But LibreOffice as a brand is now established and its brand value is growing pretty much everywhere. To destroy any one of these two brands all of a sudden would thus bear some painful consequences, although it may well happen in the end. Do we want this? Does anyone have an actual, sustainable and actionable plan for a brand transition? I have not heard of anything of that kind.

The fact that a common project could now contribute to the same codebase, thus making a “better and stronger” office suite is somewhat moot. LibreOffice took whatever it wanted from Apache OpenOffice through the licensing specifics of the two suites; but in sheer contributions, Apache OpenOffice has now little to offer to LibreOffice. Besides, the two contributors’ pools are so different in size that the addition of AOO developers would not be really meaningful to LibreOffice while if the reverse was true, things would be very interesting. However, it means that here again we pretend to play with contributors like we’re measuring army regiments. Community members come and go as they please, and a reunification is not something everyone is necessarily looking forward to.

There is indeed little value in having two similar office suites, although it is a fundamental expression of software freedom, and that alone should be enough. We also have something like 150 Linux distributions and if we really look around and apply this way of thinking,  we may want to merge with Calligra, Abiword and Gnumeric. That too, makes absolutely no sense. Remember, however, that neither AOO nor LibreOffice actually want to be “similar”, and despite a popular perception, they are growing rather different each quarter. The same can be said of Calligra, a project that runs on a very different code base. In a nutshell, clones may not make much sense, but choice is good especially if the choice involves real differences. There are now real differences between AOO and LibreOffice, in terms of features, of file format support, in terms of ecosystem and engineering processes as well. The choice between these two suites is becoming clearer as time goes by.  We shouldn’t forget that when we picture anything like a competition between Free and proprietary software, we are not implying that there should be only one option on either side.

Last but not least, interoperability issues have been mentioned by several well informed parties as being a problem and ultimately a hindrance to the adoption of Open Standards such as ODF. While this is a rather complex issue, it is also not a blindingly critical one, in the sense that the issues that can be met tend to arise in specific environments. These usually involve a userbase using OpenOffice.org or AOO together with LibreOffice and documents that have already been migrated to ODF. Growing differences in implementations invariably lead to visible differences in the presentations of documents (although there is no data loss) and therefore generate frustration and users’ discomfort. The only possible solution to these hurdles (aside a careful and diligent migration expert leading the ball) is to have AOO and LibreOffice cooperate on specific interoperability issues. But make no mistake: anyone else who would use Microsoft Office or Calligra with ODF documents would ultimately create its own incompatibilities. The actual scope of the problem is thus broader and has been expected for several years now; this is just not a mere AOO-LibreOffice  issue. A merger would solve this in the long term, but would still force some users to abandon one implementation for another.

Before I finish this very long post, let me just point out that when all is said and done on this topic, it really boils down to the actual will and intent of the stakeholders. It might seem unsavory for me to point this out, but to this day I still haven’t found any real reason for Apache OpenOffice to even exist. It does not mean that I hold this project’s members as idiots or incompetents, far from that. But if we talk about reunification, then it brings back the original question to the table: While we know why LibreOffice and the Document Foundation were created, we know of no real reason why Apache OpenOffice was started, aside one corporate will to license its own assets to a third party it is familiar with. So if the two projects were to reunite, one must pay close attention at the actual meaning of this movement and listen to the actual projects’ contributors. When Software Freedom is involved there is no point in bypassing the community.

13 Responses to "Reuniting LibreOffice and AOO – a personal take"